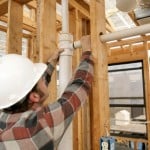 Even when you are involved with a good contractor, there often are numerous problems on a construction project. Because you are dealing with a multi-step process there are many reasons that problems could crop up.

There could be mistakes on the construction plans, which would lead to confusion for the contractor. Even if there are no issues with the plans, often contractors interpret the drawings based on what they have seen or done on previous projects, which might not be the intent of what the designer is communicating on the plans.

Â Most builders contract out the various trades- which means that each one of the subcontractors is a separate business that the builder does directly control. Many of the subs are good at what they do (like plumbing or electrical), but they don’t necessarily know how to run a business. And often this leads to the subs committing to too much work and becoming overworked and behind.

Many of the materials used in construction are continually changing because of competition or new technology or environmental issues. Often these new materials have not been long-term tested in the real world before they come on the market. A new rubber gasket or window caulking or water-based paint may not work properly or fail entirely when the weather changes. The more custom your project is, the more vulnerable you become to the unknowns the construction world. A good designer and contractor can shield you from a lot of problems, but construction is inherently problematic because of the number of steps, complexity and cost. The good news is that almost every problem has a solution and if you have a team you can trust, they can work together to put that solution in place.