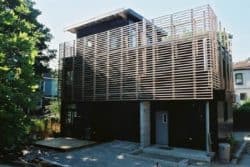 On Now Toronto’s site there is a good discussion of the recent consultations taking place to determine how Toronto can implement laneway housing as an additional stock of rental accommodations. Even though Vancouver has allowed laneway housing since 2009, Toronto has been slower to move in this direction. Some of the challenges have been around servicing the units as well as access by emergency services.

But instead of considering it as a complete new house, if you substitute the phrase “laneway housing” with “laneway suite” you get a better idea of how the city is viewing these new dwelling spaces. Although Toronto has over 300 km of lanes in the central part of the city, allowing these units isn’t going to solve affordability issues in Toronto’s real estate market.

Rather, it will hopefully spur new thinking about density and intensification especially when we consider that many of Toronto’s main streets are predominantly 2 story structures dating from before the middle of the last century. As more and more people move to the city, we need to consider not only what to build, but how to build on communities that allow us to use resources in the most effective way.